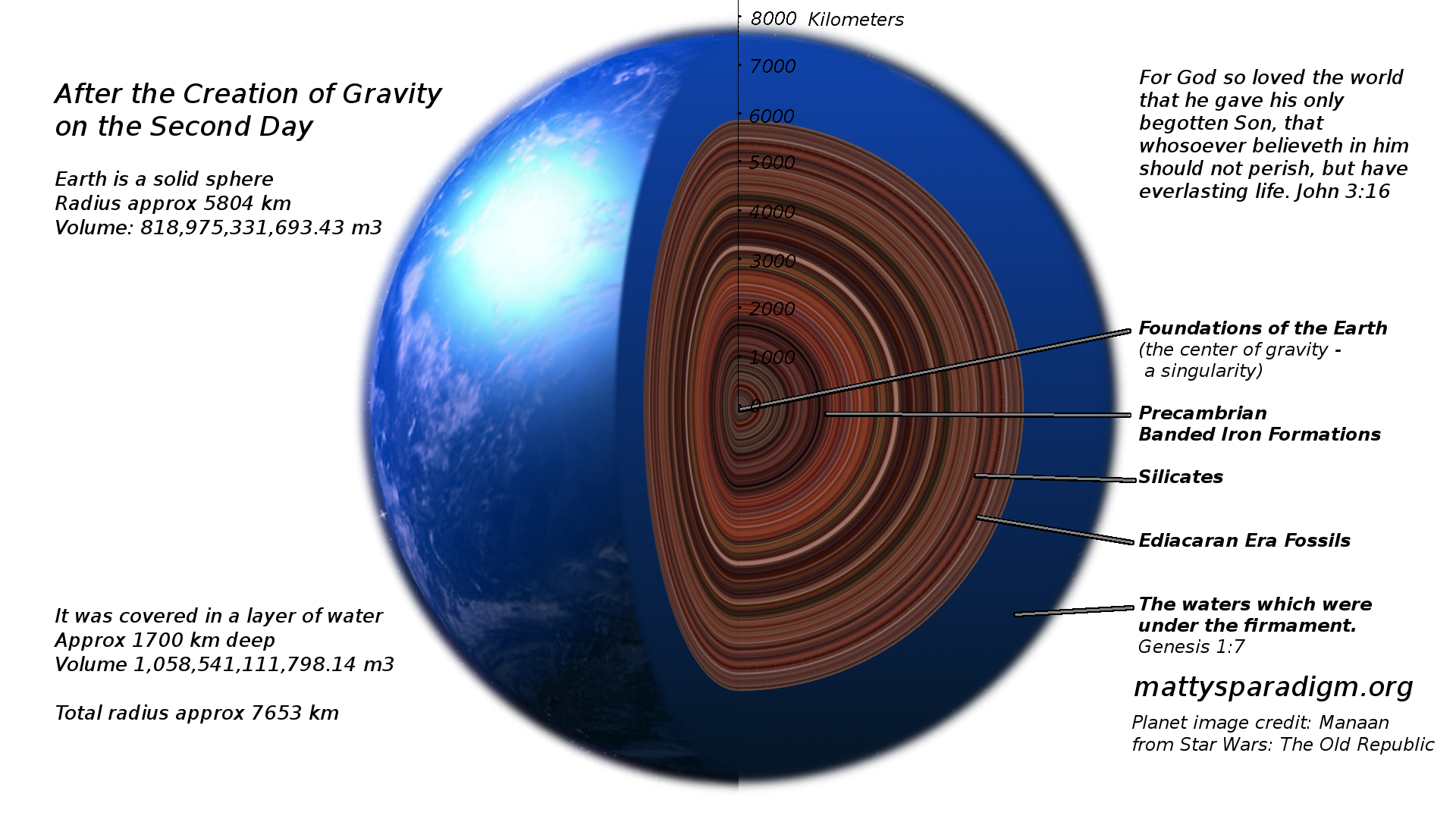 When the Lord said, Let there be a firmament in the midst of the waters, and let it divide the waters from the waters… he established the position of the heavens. Considering the passage: when he set a compass on the face of the depth: it’s completely logical to understand the heavens as a circle, or sphere, which has a fixed distance, or radius, from the center.

When he prepared the heavens, I was there: when he set a compass upon the face of the depth:

Indeed My hand has laid the foundation of the earth, And My right hand has stretched out the heavens; When I call to them, They stand up together.

Without gravity there’s no weight. Particles may have more or less mass, and be more or less dense, but when there’s no gravity they’re just mixed up together, with no ordering. The condition of the creation on the dawn of the second day was a formless deep filled to capacity with atoms, molecules, cells and many organisms: algae, and colonial animals such as sponges. Yet it was dark. But the Lord had already purposed to separate light from dark.

The Lord created gravity by selecting a specific point in the depths, and he caused the power of attraction to dwell there.

Where were you when I laid the foundation of the earth?
Tell me, if you have understanding.
Who determined its measurements—surely you know!
Or who stretched the line upon it?
On what were its bases sunk,
or who laid its cornerstone,
when the morning stars sang together
and all the sons of God shouted for joy?

It seems possible, and fits the unity of scripture, that this power is Divine love:

For God so loved the world, that he gave his only begotten Son, that whosoever believeth in him should not perish, but have everlasting life.

The Lord God’s creation is his great work of redemption. The Lord will that the dark be overcome, and everything that is good and holy should dwell with him in the eternal light and glory of the Lamb, in heaven.

And the light shineth in darkness, but the darkness comprehended it not.

So the Lord set to physically separate everything that was light from the darkness. Light weight, and light bearing are, in this sense, synonymous. Dark and heavy are, likewise synonyms. Due to the very nature of created, physical things: atoms, molecules, and structures; those that are larger, heavier, or denser, are darker.

The power of gravity acted upon every particle in the formless mass. The most massive and dense atoms and molecules migrated to the center of gravity forcefully. The motion of the heavy particles towards the center displaced the lighter ones away from it, and a gradient of heavy-light particles formed all around the center. The formless mass was pulled into a perfect sphere. Massive particles contain the most darkness, and as they accumulated around the center it became completely dark. It soon consisted of concentric rings of density, a graduation based on the atomic weights and densities of the heavy metallic elements.

However, some large structures can be very light, because they have low density; crystals can be large and heavy, but are transparent because they have an open-lattice atomic structure. The light particles floated up to the line the the Lord drew as the position of the firmament. By the command of God, under the power of gravity, the firmament condensed out of aqueous solution to form a rigid and load-bearing spherical structure. There was still water outside, or above, it, but the crystallization of the firmament drew most of the atoms and molecules from it. This is the physical basis for the passages of scripture which describe how the Lord spread out, or spreadeth forth, the heavens. The firmament became the source of light on the second day; there was no sun.

And they that be wise shall shine as the brightness of the firmament; and they that turn many to righteousness as the stars for ever and ever.

The formation of the atmosphere had an effect on the particles that were in solution. As many particles were packed into the growing core of the Earth, and as gases evaporated out of the water, its composition was changing. The living component of the creation, cells and such like, came to float on the surface of the water, where they received the light of the firmament.

Science believes that the formation of the mantle of the Earth was taking place as the atmosphere formed. There are physical structures of the Earth, rock formations, that show clearly the formation of concentric rings of sediment around the core of the Earth. Most of the sedimentary formations that we see today are the result of the great flood of Noah’s day, but others have a very different character.

“They typically occur in belts hundreds to thousands of kilometers long, up to several kilometers wide, and with thickness as great as 600 m… The rock successions in which these iron formations occur usually lie above high-grade metamorphic rock, but the iron formations are usually not the basal units in the succession… Where the general geologic setting has been studied in more detail, a comparison of iron formations on opposite continents fits fairly well with the assumption of originally coherent iron-formation belts.”

These rocks contain rust, iron oxide, that results from iron atoms reacting with free oxygen, 02, the kind in the atmosphere. Most paleontologists, in their imaginary schemes about how the primeval earth evolved, assign the deposition of the banded iron formations to coincide with the development of an oxygen rich atmosphere. This could not happen before the evolution of cells that are photosynthetic, since a by-product of photosynthesis is free oxygen. Indeed, the banded iron formations are, so to speak, the “evidence,” for the evolution of the first photosynthetic cells. The evolution story requires free oxygen from somewhere, so that iron oxides could form and be deposited as rock formations.

Well, yes indeed the deposition of the banded iron formation took place as the original atmosphere formed. As the pressure under the firmament dropped, oxygen came out of solution in the contracting waters. Some of this oxygen reacted with iron atoms dissolved in the water, forming insoluble iron oxides. These oxides, pulled by gravity, precipitated into thick layers all around the growing core of the earth. Once again, scientists have seen the proof with their own eyes, understood in their minds, and completely turned away in their hearts.

The force of gravity, its appearance in the sequence of creation, and the process we can deduce from scripture of its action, help us to understand the meanings of:

As best as I can figure I have been thinking about and writing about these issues since before 2002, when I drew this early conceptual diagram. Most of this article is directly copied from a piece that I wrote in 2003.

More recently I began to work on the graphics I would need for a movie that shows the process of creation and the history of the earth.

This just didn’t seem to capture the essence of the concept I am trying to get to, of concentric rings of sediment accumulating around a center of gravity.

Here is the planet Manaan, from Star Wars, the home of the Wookies, used to depict the Earth at the end of the 2nd day of creation.