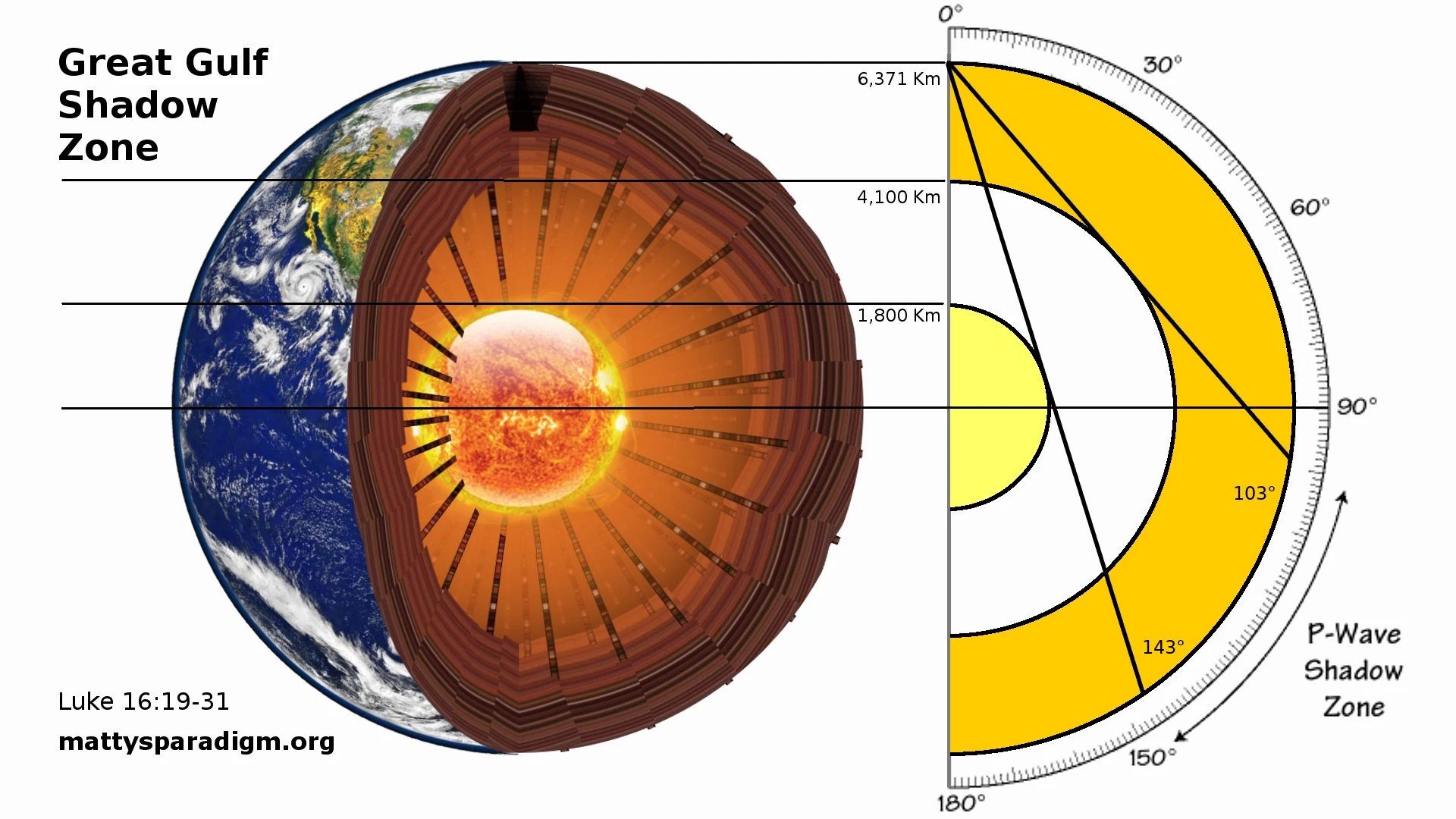 But Abraham said, ‘Son, remember that in your lifetime you received your good things, and likewise Lazarus evil things; but now he is comforted and you are tormented. And besides all this, between us and you there is a great gulf fixed, so that those who want to pass from here to you cannot, nor can those from there pass to us.’

The testimony of Jesus Christ establishes that there’s a great gulf of open space inside the Earth. It’s described in the passage known as the parable of the rich man and Lazarus (Luke 16:19-31).

P-waves can propagate through anything, even open space, but since S-waves don’t this gives us a way to define boundaries inside the Earth where the density of material changes from solid to something else. One such boundary marks the inner surface of the lower mantle.

P-waves are sound waves. Their speed is directly related to the density of material that they’re propagating through. P-waves travel slightly faster in solids and liquids than they do in vapor because of the density of the material. They also travel in straight lines. A region of different density causes a P-wave shadow zone. In our diagram it’s between 104° and 140°. However, seismic waves don’t tell us the nature of the material in the region, and we’ve never drilled down deep enough to find out what it is.

We’re using the empirical data that shows the P-wave shadow from 104° to 140° and drawing straight lines to establish our boundaries.

Notice on the diagram the curved lines which appear to indicate the path of both P and S-waves through the Earth. To make a long story short, this is how SciPop derives its current model of the interior of the Earth. The question that we should be asking is: why are the lines curved? Sound waves (P-waves) go in straight lines.

Since SciPop has a priori rejected the possibility of hell and a great gulf (which just happens to be divine truth), then it has to have an alternative. In this case it has opted for a liquid outer core and herein the problem lies: The measured values for the travel times of P-waves in the shadow zone are slower than they should be if the material is liquid. This is one reason why the lines in the diagram are shown to be curved: to account for the extra travel time which we measure, but didn’t predict, based on the SciPop model. The curvature is needed to account for the difference between predicted vs. measured travel times.

We can solve the problem of why measurements don’t match predictions. The reason why there’s a difference is gravitational time dilation (GTD). Time passes more slowly the closer you get to the center of the Earth. As the P-waves propagate through the Earth the rate of the passage of time varies with depth. The extent to which this manifests can only be roughly guessed. As such the SciPop predicted travel times have failed to take into account a measurable phenomenon: GTD. This means that the boundaries of the zones in the SciPop model are in the wrong places.