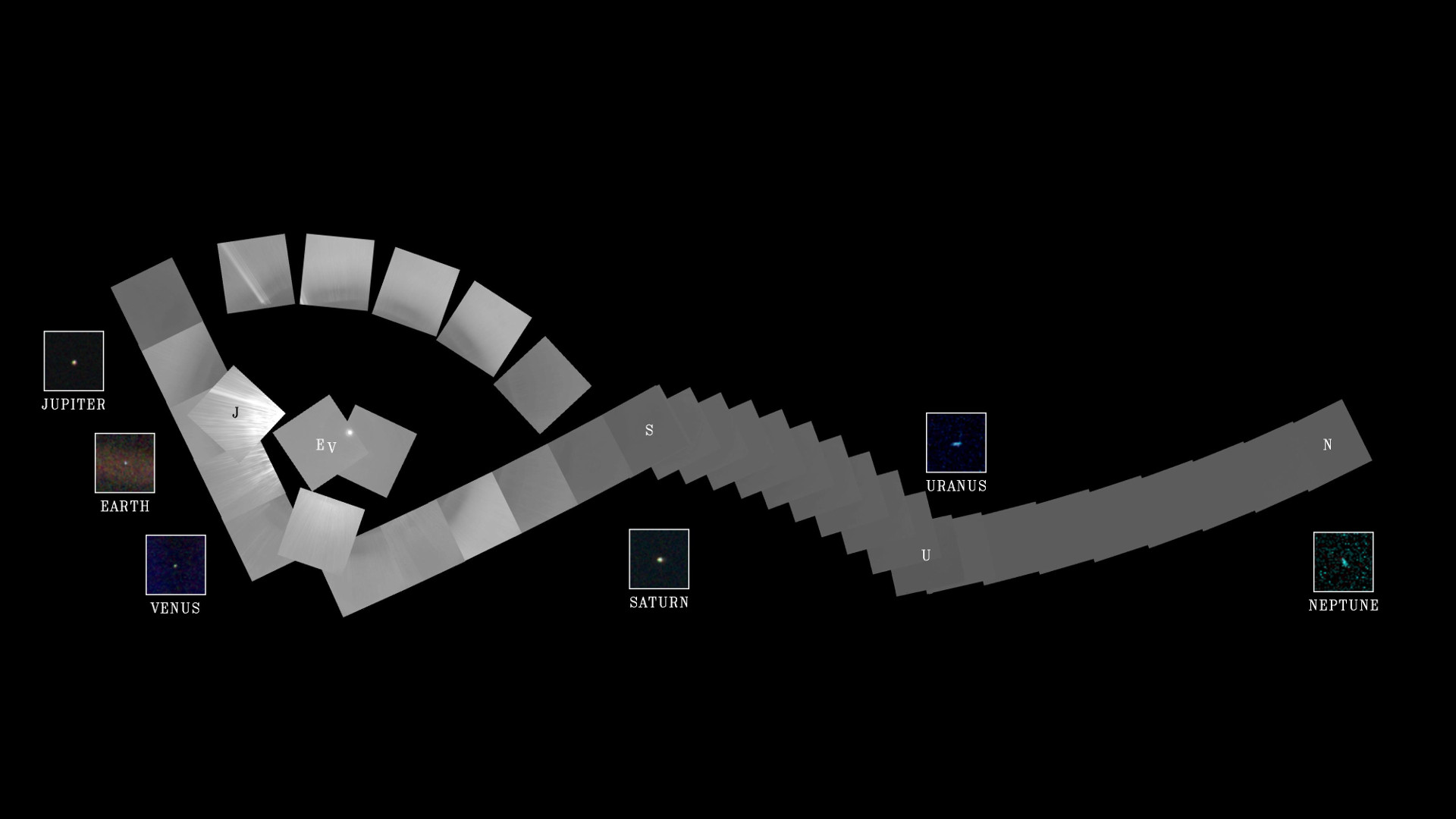 Canst thou bind the sweet influences of Pleiades, or loose the bands of Orion?
Canst thou bring forth Mazzaroth in his season? or canst thou guide Arcturus with his sons? Knowest thou the ordinances of heaven? canst thou set the dominion thereof in the earth?

The image here was taken by Voyager 1 by aiming its cameras back towards the Earth and taking a series of pictures. It is called the Solar System Family Portrait. The sun is not large as seen from Voyager, only about one-fortieth of the diameter as seen from Earth.

There’s an interesting phenomena regarding the transmissions from the Voyager spacecraft. Their transmissions are affected by a Doppler shift which varies at different times of the year. In our heliocentric, sun-centered, concept of the universe this has a pretty simple explanation: Voyager is moving at a constant rate away from the sun. As the Earth orbits the sun there’is a period of time during the year when it appears that the Earth is catching up to Voyager. The Earth is moving faster in its orbit than Voyager is moving out into space. This means that for a while the distance between Voyager and earth actually gets smaller, before getting larger again as the Earth’s orbit moves away from Voyager.

This graphic includes adjustable options for how you view the animation. You can view the it from any frame of reference in the solar system using a drop down menu.

Voyager I and II Flight Path

So how do we account for this given that our belief is that the earth is at the center and is not moving? It’s simply a matter of frame of reference, or point of view. In our geocentrospheric model the Sun has a helical orbit of the Earth. It takes 6 months for the sun to go from the point of its northernmost orbit to its southernmost orbit. This doesn’t change anything that we see. This is why in the heliocentric model the Earth axis is tilted by 23.5 degrees. At its southernmost orbit the sun is closer to Voyager, which is below the plane of the ecliptic. When the sun is aligned between Earth and Voyager the gravitational pull causes Voyager back towards the Earth. As the sun’s orbit tracks northward its gravitational influence on Voyager drops.

Now there has to be something with a large mass in outer space that could cause Voyager to head back into space. What could this be but the firmament? It’s happening, the motion is observed, the firmament must be there.