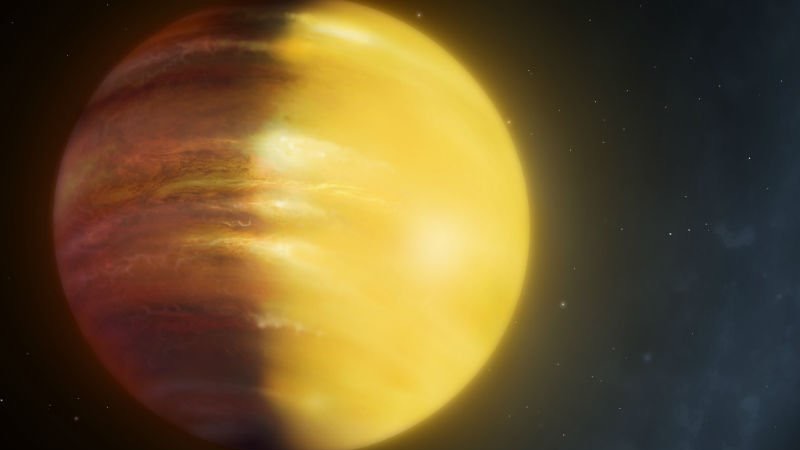 This is a direct copy of a SciPop or news article preserved here because things on the internet have a bad habit of disappearing when you try to find them again. Full credit is given to the original authors and the source.

An exoplanet 16 times bigger than the Earth has shown signs of powerful changing winds, say researchers.

This is the first time that the weather systems were observed on a gas giant outside of the solar system and the researchers documented their findings in the journal Nature Astronomy.

Discovered in 2008, HAT-P-7b is located more than 1,040 light-years away from Earth. Aside from being 16 times larger than the Earth, it is also 500 times more massive than the planet, 40 times bigger than Jupiter, and orbits around a star that is twice as large and 50 percent more massive than the sun.

Using NASA’s Kepler observatory, the researchers were able to observe large-scale changes in the powerful winds moving across HAT-P-7b, which were likely to lead to catastrophic storms on the planet. This discovery was made possible by monitoring reflected light from HAT-P-7b’s atmosphere and identifying light changes, leading to the realization that the planet’s brightest point shifts positions.

An equatorial jet with drastically varying wind speeds is behind this shift. At their fastest, the winds are capable of pushing a great number of clouds across HAT-P-7b.

Clouds moving through HAT-P-7b are likely to be made of corundum, a mineral part of ruby and sapphire formation. This would make the clouds visually stunning but humans will never enjoy that view because the planet is inhabitable, no thanks to its violent weather systems and harsh temperatures. One side of HAT-P-7b is tidally locked, always facing the star the planet orbits, while its other side is perpetually hotter than the other.

“We expect clouds to form on the cold night side of the planet, but they would evaporate quickly on the hot day side,” said David Armstrong, one of the researchers.

He explained that the results of their work showed that strong winds circle HAT-P-7b, which transports clouds from the planet’s night side to its day side. With winds dramatically changing in speed, they lead to the formation of huge clouds that also die away soon.

While HAT-P-7b is not habitable, there may be other exoplanets outside of the solar system that can support life. According to research from an international team of scientists, three Earth-like planets are orbiting a dwarf star in the galaxy TRAPPIST-1. However, two of the exoplanets are mostly rocky and feature atmospheres a lot like Venus, Mars, and Earth’s, opening up the possibility that they are habitable. TRAPPIST-1 is located 40 light-years away from Earth.

The Firmament is on the Edge of Space